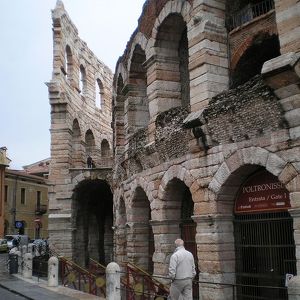 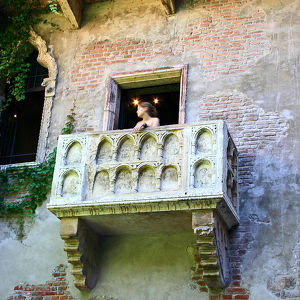 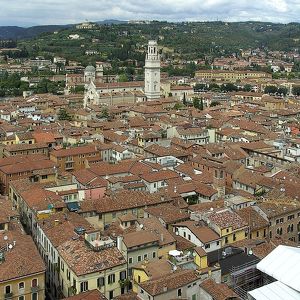 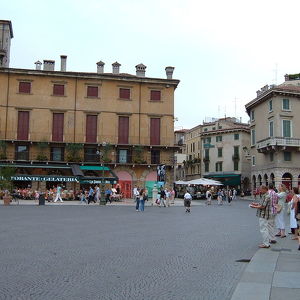 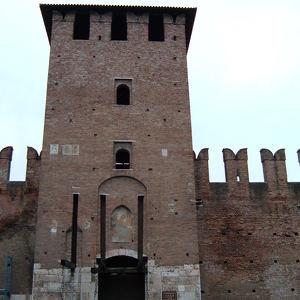 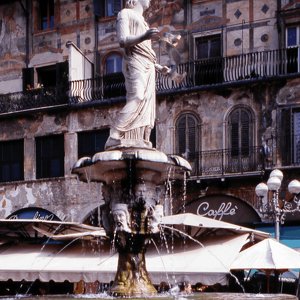 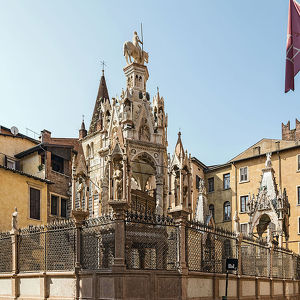 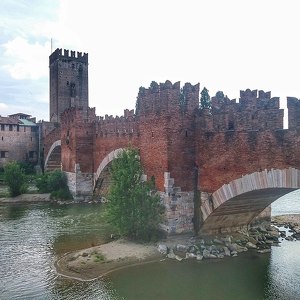 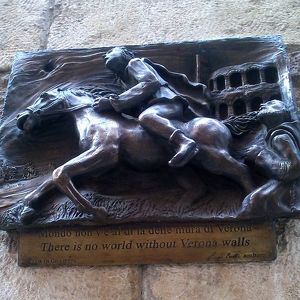 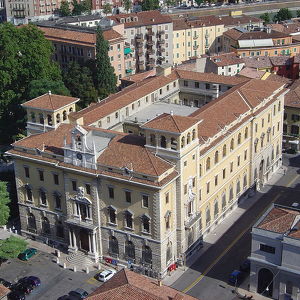 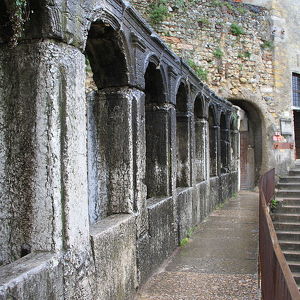 The Verona Arena is a Roman amphitheatre in Piazza Bra in Verona, Italy built in the first century. It is still in use today and is internationally famous for the large-scale opera performances given there. It is one of the best preserved ancient struc...

The northern side of the square is occupied by the ancient town hall, the Torre dei Lamberti, the Casa dei Giudici ("Judges' Hall") and the frescoed Mazzanti Houses. The western side, the shortest one, features the Baroque Palazzo Maffei, decorated by ...

Piazza Bra, often shortened to Bra, is the largest piazza in Verona, Italy, with some claims that it is the largest in the country. The piazza is lined with numerous cafés and restaurants, along with several notable buildings. The Verona Arena, origina...

Fountain of Madonna of Verona

Fountain of Madonna of Verona

The Scaliger Tombs is a group of five Gothic funerary monuments in Verona, Italy, celebrating the Scaliger family, who ruled in Verona from the 13th to the late 14th century. The tombs are located in a court outside the church of Santa Maria Antica,...

The Castel Vecchio Bridge or Scaliger Bridge (Italian: Ponte Scaligero) is a fortified bridge in Verona, northern Italy, over the Adige River. The segmental arch bridge featured the world's largest span at the time of its construction (48.70 m). It was...

The Torre dei Lamberti is a 84 m high tower in Verona, northern Italy. Construction of the tower was started in 1172. In May 1403 the top of the tower was struck by lightning, but the restoration works didn't start until 1448 and took 16 years. Duri...

Verona Cathedral is a Roman Catholic cathedral in Verona, northern Italy, dedicated to the Blessed Virgin Mary under the designation Santa Maria Matricolare. It is the episcopal seat of the Diocese of Verona. It was erected after two Palaeo-Christia...

The Roman theatre of Verona is an ancient Roman theatre in Verona, northern Italy. It is not to be confused with the Roman amphitheatre known as the Verona Arena.

The Ponte Pietra, once known as the Pons Marmoreus, is a Roman arch bridge crossing the Adige River in Verona, Italy. The bridge was completed in 100 BC, and the Via Postumia from Genoa to Aquileia passed over it. It is the oldest bridge in Verona. ...

Piazza dei Signori is a city square in Verona, Italy.

A church at this site may has been traced to the 8th century, and by the 11th century a second story and belltower was added by the Benedictine order. The campanile was not completed until the 13th century, it contains six bells in F cast in 1755 and r...